(Please refer to GAAP reconciliation tables in this release)

John Chisholm, Flotek’s Chairman, President and Chief Executive Officer commented, “Last year was a transformational year for Flotek, as we undertook several measures to improve our market position and profitability. First, during 2017, our management team was transformed to reflect the future of Flotek, and we are excited about the strength of our leadership team as we enter 2018 as a re-defined organization. Second, in May, we completed the Drilling Technologies and Production Technologies segment divestitures which have improved our free cash flow profile. Third, we paid down the balance of our term loan and increased the availability of our revolver while extending its maturity by two years. Our total debt at year end 2017 was $28.0 million, down 42% from $48.4 million at year end 2016. Fourth, we initiated a thorough review of our SG&A with a targeted run-rate reduction of 20% from 4Q16 levels. Our 4Q17 cash SG&A achieved a 25% reduction. Through it all, we have remained committed to our Research and Innovation, which continues to introduce new products into the market specifically to meet the requirements and needs of both E&P operators and service companies who remain integral in the efficient distribution channels into the industry.

“During the fourth quarter 2017, our Energy Chemistry Technologies (“ECT”) segment experienced a slower than anticipated December month, largely due to weather events, budget exhaustion and seasonal factors which we alluded to in our guidance last quarter. Despite the industry related operational issues and subsequently lower revenues, our recent focus on cost control led to the highest quarterly segment profitability at the EBITDA and operating income lines for the year. As an organization, we are proud of the progress and execution we have made on this front, which was laid out on our third quarter 2017 call, and which I attribute to the quality and effort of our employees.

“Additionally, we have begun increasing our marketing efforts through the release of a series of case studies. Most recently, we released a study evaluating a sample of 426 Midland Basin wells targeting the Wolfcamp B interval. Wells with our Complex nano-Fluid® technology improved cumulative barrels of oil equivalent (BOE) over the first 12 months of production by 22% after normalizing for proppant amount and perforated length. We will continue to provide insight into the success E&P operators experience in utilizing Flotek’s custom chemistry solutions going forward. Our focus remains on improving reservoir performance and recovery factors which makes a difference to our clients’ economics and provides consistent and reliable chemistry technology to operators and service companies alike.

“Our Consumer and Industrial Chemistry Technologies (“CICT”) segment continued to perform well despite a volatile citrus market, which remains impacted by lower crop yields due to disease and hurricane activity. Fourth quarter revenues were in line with our guidance and represent an 11.3% year-over-year improvement. During the fourth quarter we completed the installation of a new vacuum distillation unit in Winter Haven, FL, and we continue to invest in improving our facilities and market position in our CICT segment.

“As a result of reducing our debt, we have bolstered our financial position. Our only debt today consists of our revolver borrowings, which is primarily being used to fund working capital. Our balance sheet gives us the flexibility to remain opportunistic moving forward as we execute our plans to grow in the custom chemistry marketplace, both in ECT and CICT. We will also continue to evaluate further stock buybacks but believe our runway of growth opportunities requires disciplined investment to preserve our strong balance sheet and liquidity position.

“Looking ahead, I am very excited about our opportunities, our employees are dedicated, and our focus remains on serving our clients the best we can by offering new technology at competitive prices. The measures we are undertaking to control our costs, leverage our R&I capability for new product development and align ourselves with our clients is designed to have a measurable, positive impact to shareholder value in the long run.”

Excluding select items, comprised primarily of executive retirement/severance expense and the impact of the U.S. Tax Cuts & Jobs Act of 2017 to income tax expense totaling $9.2 million, net of tax, or $0.16 per share, adjusted EPS from continuing operations was ($0.07) for the twelve months ended December 31, 2017, compared to ($0.11) for the twelve months ended December 31, 2016. (See our Reconciliation of Non-GAAP Items and Non-Cash Items Impacting Earnings at the conclusion of this release.)

Earnings Before Interest, Taxes, Depreciation and Amortization (“EBITDA”) for the twelve months ended December 31, 2017, was $10.1 million, compared to $15.6 million for the twelve months ended December 31, 2016. Adjusted EBITDA, which excludes select items comprised primarily of stock compensation expense, gain on sale of assets and executive retirement/severance expense, for the full year 2017 was $23.5 million, compared to full year 2016 adjusted EBITDA of $14.9 million. Management believes that adjusted EBITDA provides useful information to investors to better assess and understand operating performance and cash flows. (See our Reconciliation of Non-GAAP Items and Non-Cash Items Impacting Earnings at the conclusion of this release.)

Excluding select items, comprised primarily of executive retirement/severance expense and the impact of the U.S. Tax Cuts & Jobs Act of 2017 to income tax expense totaling $8.0 million, net of tax, or $0.14 per share, adjusted EPS from continuing operations was $0.00 for the three months ended December 31, 2017, compared to ($0.07) for the three months ended December 31, 2016. (See our Reconciliation of Non-GAAP Items and Non-Cash Items Impacting Earnings at the conclusion of this release.)

EBITDA for the three months ended December 31, 2017, was $5.3 million, compared to $10.0 million for the three months ended December 31, 2016. Adjusted EBITDA, which excludes select items comprised primarily of stock compensation expense, gain on sale of assets and executive retirement/severance expense, was $7.7 million compared to fourth quarter 2016 adjusted EBITDA of $0.7 million and third quarter 2017 adjusted EBITDA of $3.3 million. Management believes that adjusted EBITDA provides useful information to investors to better assess and understand operating performance and cash flows. (See our Reconciliation of Non-GAAP Items and Non-Cash Items Impacting Earnings at the conclusion of this release.)

A summary income statement reflecting fourth quarter and full year results can be found at the conclusion of this release, as well as GAAP reconciliation tables.

* Percentages may be different when calculated due to rounding.

• During the fourth quarter 2017, we incurred $7.3 million of tax expenses as a result of changes under the U.S. Tax Cuts & Jobs Act of 2017; as well as $0.7 million (net of taxes) related to executive retirement/severance expenses.

• Due to competitive reasons, in future periods we will no longer disclose the detail of CnF® revenues and volumes which we have provided in past releases. This will better align with the ECT segment as a holistic custom chemistry solution provider to the oil & gas industry.

• Finally, segment gross margins are no longer reported for similar competitive reasons; however, we intend to continue to report segment operating income and adjusted EBITDA.

In commenting about Flotek’s outlook, Mr. Chisholm added, “With respect to our ECT segment, the oil and gas industry is shaping up for a stable operating environment moving into 2018. To date, operators appear to be acting with a degree of financial discipline and a renewed focus on returns over growth. Disciplined spending behavior, logistics challenges and weather delays in major basins during the start of the year are likely to lead to a more flattish environment in completions activity in 1Q18 sequentially, however the quarter will be dependent upon how quickly activity can return to pre-December levels. In our CICT segment, we expect revenues to increase sequentially and be flat to up year-over-year. Our SG&A reductions achieved through our cost cutting initiative should largely remain as we progress through the year. We anticipate capital spending to be in the $12 million to $16 million range for 2018 and will continue to manage our investments with a focus on our operating cash flows.”

Flotek will host a conference call on Wednesday, February 21, at 9:30 AM CT (10:30 AM ET) to discuss its operating results for the three and twelve months ended December 31, 2017. To participate in the call, participants should dial 800-768-8804 approximately 5 minutes prior to the start of the call. The call can also be accessed from Flotek’s website at www.flotekind.com.

Further information about the risks and uncertainties that may impact the Company are set forth in the Company's most recent filings on Form 10-K (including without limitation in the "Risk Factors" Section), and in the Company's other SEC filings and publicly available documents. Readers are urged not to place undue reliance on these forward-looking statements, which speak only as of the date of this Press Release. The Company undertakes no obligation to revise or update any forward-looking statements in order to reflect any event or circumstance that may arise after the date of this Press Release. 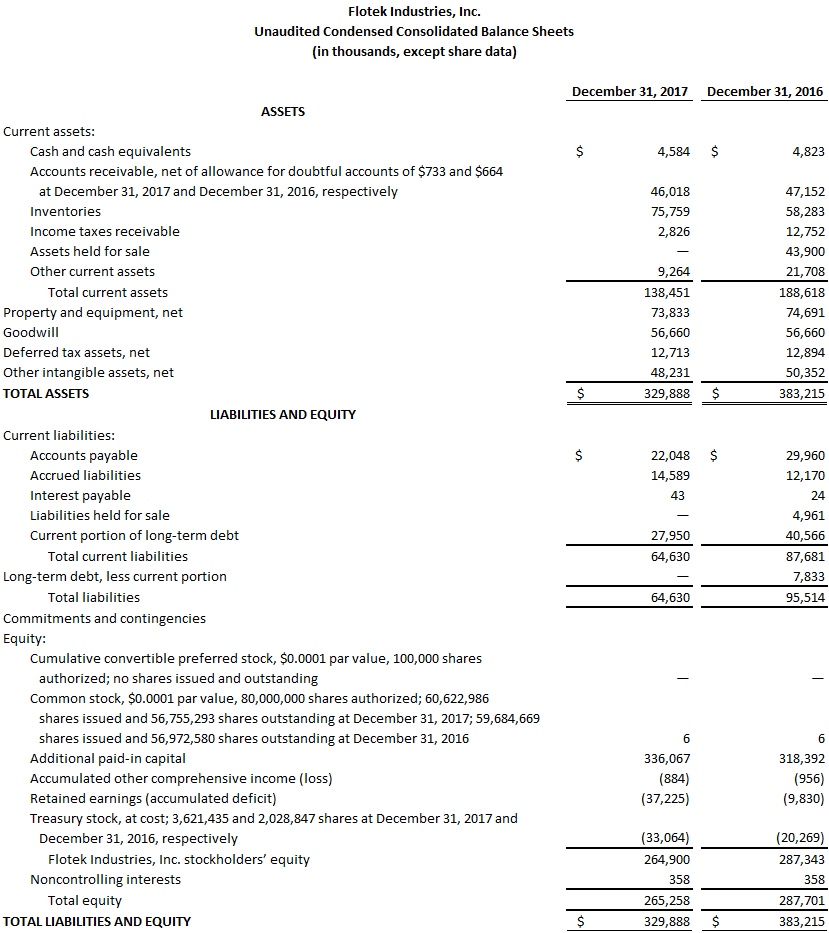 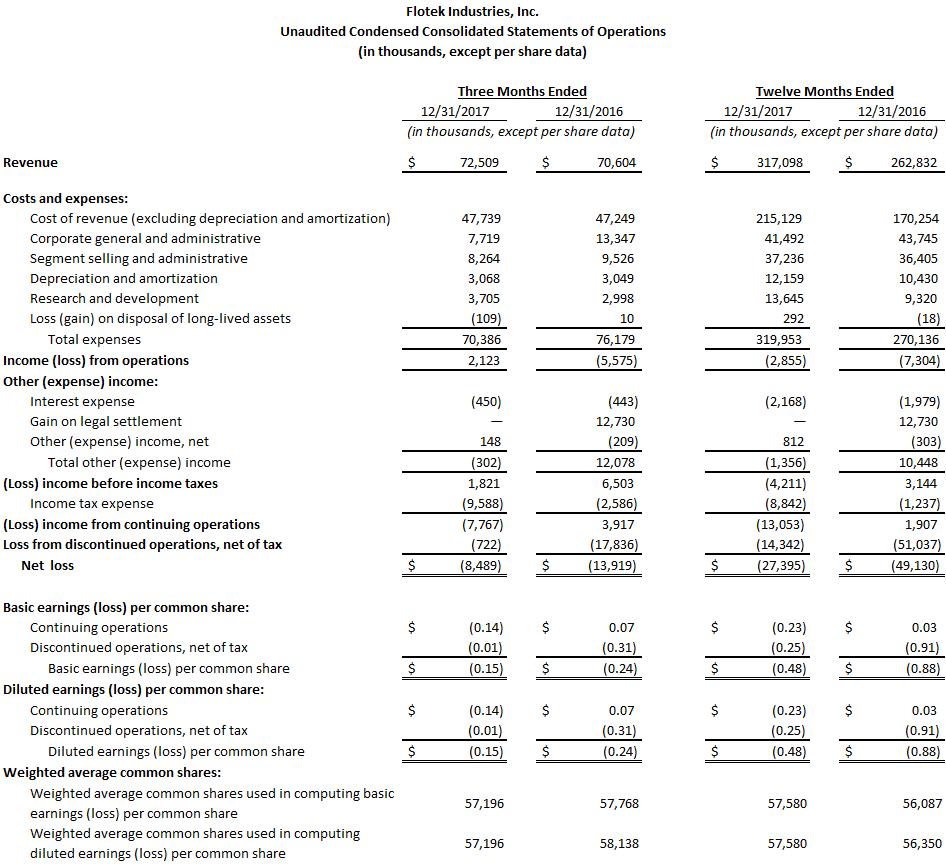 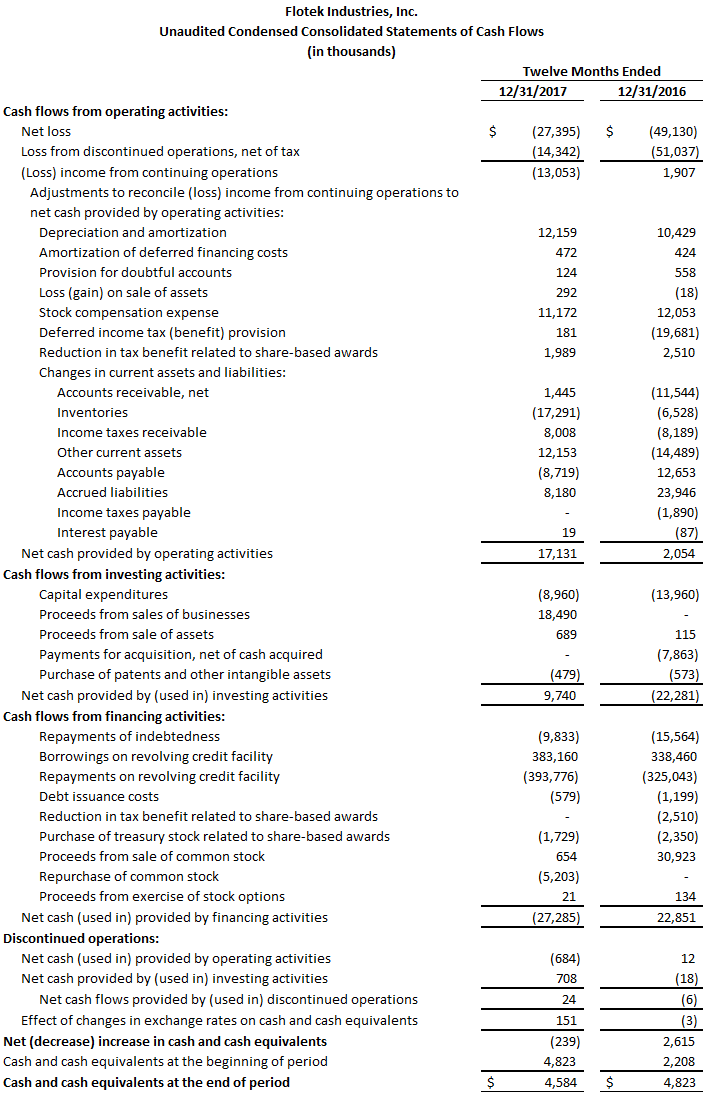 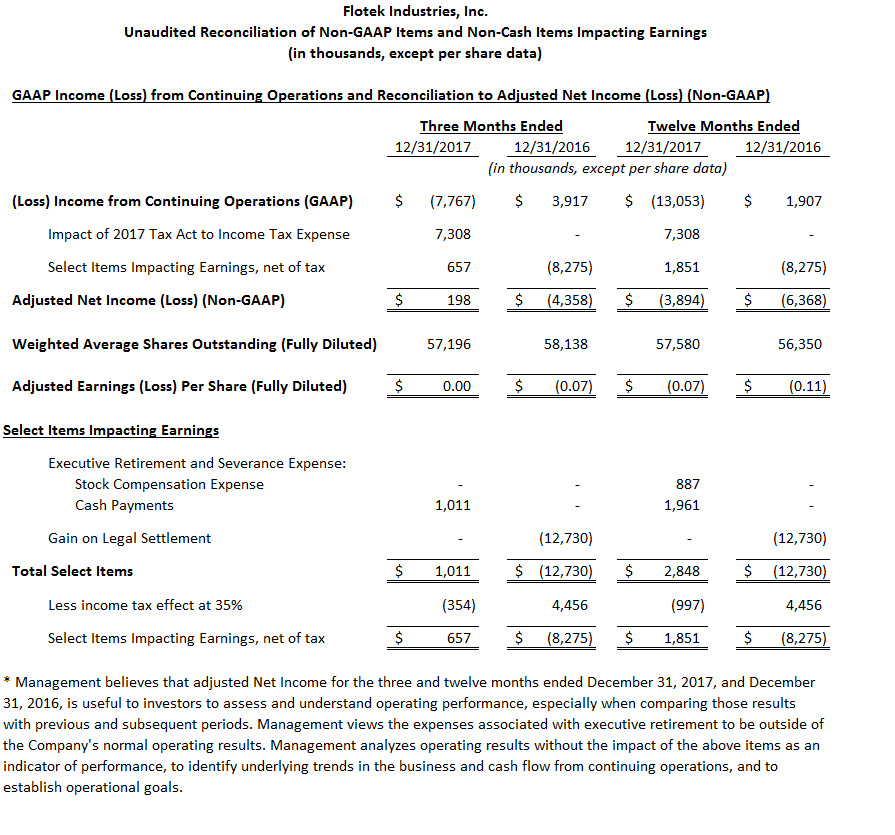 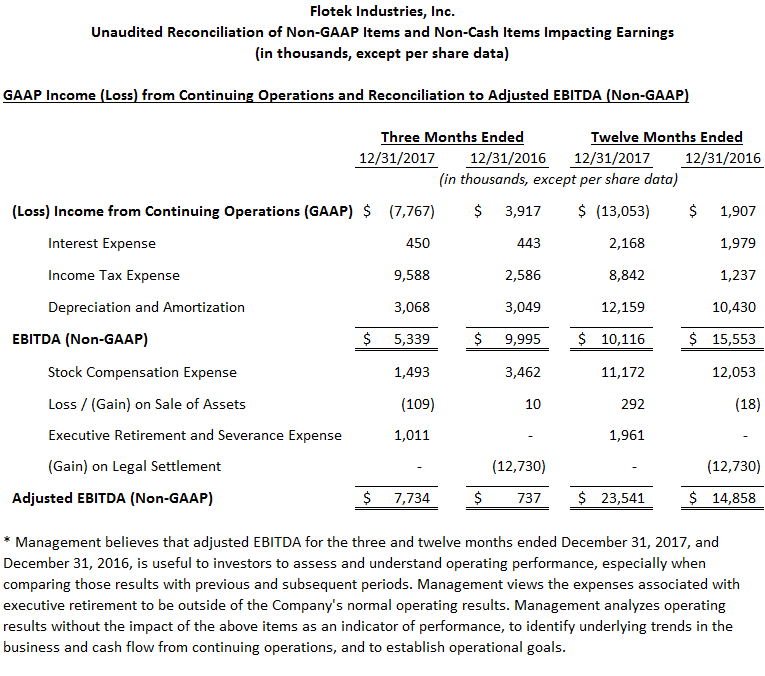 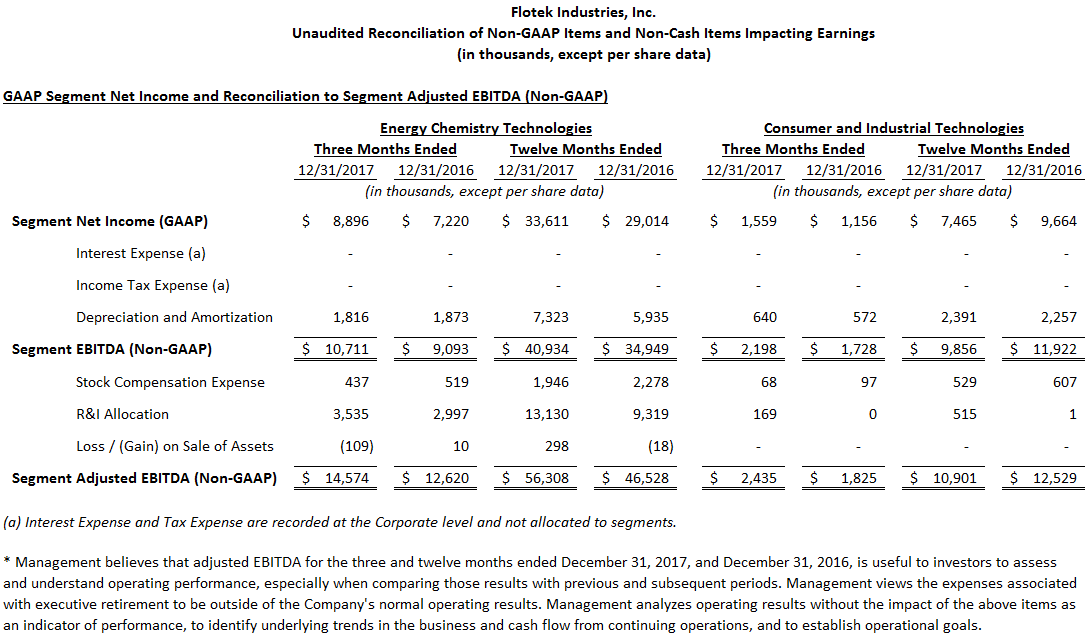